Bank accounts as currently offered appear unappealing to the majority of individuals in our three samples of unbanked, rural households – even when these accounts are completely subsidized.

That’s the punchline of a new paper by Dupas, Karlan, Robinson, and Ubfal, “Banking the Unbanked? Evidence from three countries”. In both developing countries and the rich world there is a lot of justified concern about the unbanked population – households with no formal financial accounts, and a popular theory that if we could just improve the accessibility of bank accounts this would be a game-changer for people. Unfortunately, like many other silver bullets before it, this one has failed to kill the stalking werewolf of poverty.

Indeed, it almost doesn’t leave the barrel of the gun. 60% of the treatment group in Malawi and Uganda (and 94% in Chile) never touch the bank accounts. The following depressing graph is the CDF of deposits for people who opened an account: 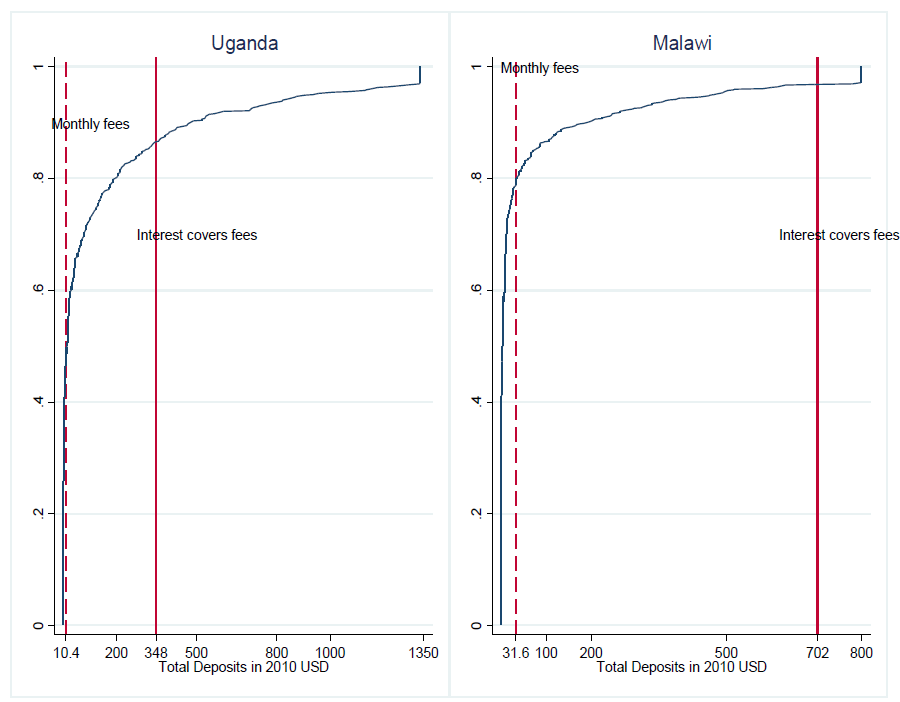 In Malawi, even among account openers, 80% of people had less money in total deposits than the account would have charged in fees (the fees were covered as part of the study). Just a tiny fraction of people had enough in deposits for the interest to cover the fees – which is the minimum for the account to compete with cash on the nominal interest rate.*

The goal of the study was to look at how accounts impact downstream outcomes like incomes and investments, and the paper dutifully reports a host of null effects on those variables. But the authors instead focus on why uptake was so low. The most popular theory among the treatment group was poverty – that people just don’t have enough money to save – and this lines up with some regression analysis results as well. But confusion also appears to be a factor: 15% of treatment-group households in Malawi say they didn’t use the account because they couldn’t meet the minimum balance, even though there was no minimum balance requirement.

Another issue with the poverty model of low savings is that it contrasts with my mental model of income dynamics in Malawi. The overwhelmingly dominant staple in Malawi is maize, and it is harvested more or less all at once in May, generating a huge burst of (in-kind) income that must be smoothed over the rest of the year. Maize is hard to store and storage has significant scale economies, so people often sell off a lot of their harvest and buy maize later with the cash – effectively “renting” storage. This requires lots of cash to be saved.

I can’t quickly put any numbers on this mental model (although maybe I’ll play around with the LSMS to see what it shows). I am quite confident about the spike in income at the harvest, though – the question is how much people need to save in cash. I’d like to see more discussion of this in future work about financial access in Africa. Dupas et al. may not have the data to do it, but future research projects should definitely collect it.

*This assumes away the problem of cash being lost, stolen, or wasted, which would make the nominal interest rate negative.

1 thought on “The unbanked don’t *want* to be banked”