I recently came across this article from the Washington Post that presents graphs of population projections through 2100. The writing seems overly pessimistic to me; it has an attitude toward African governance and economic progress that rang true in 1995, but is outdated and incorrect in 2015.

That said, the graphs are great, and fairly surprising. Especially this one: 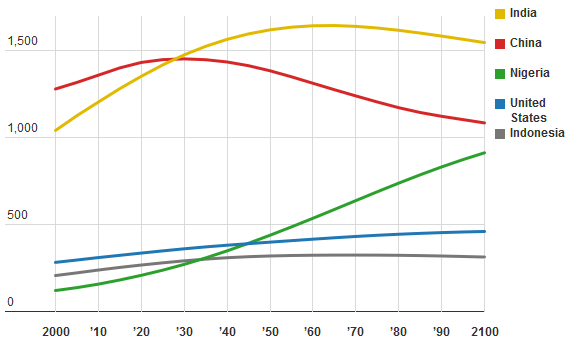 They are projecting Nigeria’s population to grow to 914 million people by 2100. Even if the truth is just half that figure, Nigeria will draw just about even with the US as the third-most-populous country in the world. Moreover, Nigeria is forecast to be the only country in the top 5 that will be unambiguously growing in population over the current century, making it a source of dynamism and labor supply for the world economy.

Based on my rigorous, in-depth investigation strategy of listening to African pop music and occasionally catching an episode of Big Brother Africa, Nigeria already plays an outsized role in an increasingly salient pan-African culture. The growth of Africa, and the rising importance of Nigeria within Africa (currently one in every seven Africans is Nigerian, a figure that will rise to one in four), mean that its importance is only going to rise.

There will be challenges: for the sake of the environment and the good of its people, the continent needs to urbanize and move away from subsistence agriculture. But the 21st century is shaping up to be an exciting one, and a positive one for Africans in general and Nigerians in particular.