Malawi is currently in the throes of yet another lovely fuel shortage. This is great timing for me, as I am currently in a mad rush to finish data collection for my project on how people’s beliefs about HIV transmission rates affect their sexual behavior.

It’s also maddening because it brings out all kinds of fallacious reasoning about markets and economics. One claim I’ve heard is that shortages like this one are just a standard thing that happens in Africa and/or poor countries. That is easily falsified by the fact that Malawi’s black market in petroleum products is supplied by people going right across the border to Mozambique (a different poor, African country), where fuel is abundant.

No, this shortage, like the others that preceded it, is caused by a price ceiling (or, to be fair, a system of several different price ceilings covering multiple markets). The details are a bit messier than an Econ 101 price ceiling graph like this one from Wikipedia, but it’s a decent first approximation. 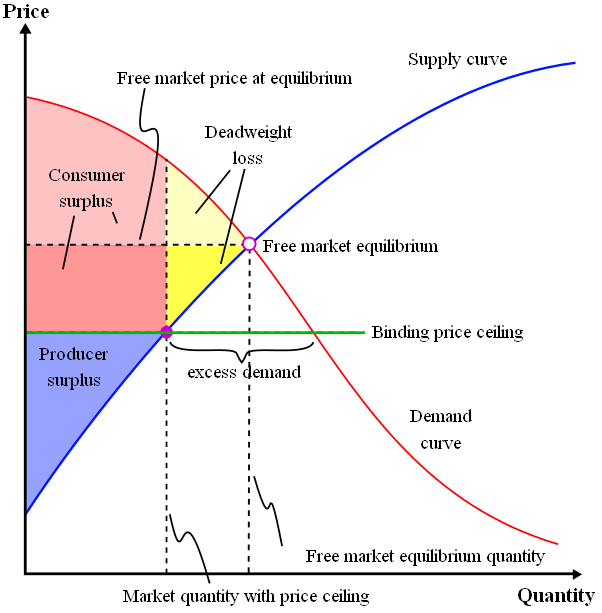 I might go into the ludicrous details of fuel markets in Malawi in a future post (and indeed I might write an entire research paper on the topic). That’s a topic for a different rant. This one is about an alleged shortage of foreign exchange, which is the most commonly-cited reason for the fact that I can’t buy gasoline. That is certainly not the cause of the country’s intermittent fuel crises, because there is no such thing as a foreign exchange shortage.

The claim is that there is not enough foreign exchange (“forex”, in the colloquial Malawian English) – that is, dollars – in the country to buy sufficient fuel on the international market to meet demand. Now, there is a sense in which this is true: dollars are hard to come by in Malawi. And this is a story which the government typically likes – a “forex shortage” sounds like an exogenous event like a drought or a plague of locusts, visited upon a blameless country by angry gods. Last year the government blamed forex shortages on donors, who had pulled their funding from the country.

But we need to go beyond the fact that dollars are hard to find in this country, and ask why that is true. To be precise, they aren’t really that hard to find. Plenty of people have them around. Rather, they are hard to buy – last year, in the throes of the alleged forex shortage, there were official waiting times of several years to buy dollars at the official, legal rates. Because it is illegal to pay a price for dollars at which their owners are willing to sell them. The exchange rate between dollars and Kwacha has nominally been floating since this spring. That should mean that you can pay whatever you want for dollars, but the float is evidently closely managed. The newspapers are again full of stories of “black market” foreign exchange purchases. There are official exchange rates available at banks, and that is what you are allowed to pay. These do change gradually, but for at least the past three weeks the actual transacted exchange rate has been 320 Kwacha to the dollar (I observe this rate whenever I withdraw money from my US bank account, because my bank* kicks ass and just gives me the market-middle rate). It is illegal to pay a higher price to obtain dollars. If you do, and you are caught, the state will use its monopoly on violence to take away your money and possibly imprison you.

Dollars are only hard to buy at the artificially-low price the government has set for them. Couldn’t they be hard to find at any price? That’s extremely unlikely, if not outright impossible. Suppose I had twenty dollars, which are supposedly worth MK6400. I’d be unlikely to sell them at that price. What if you offered me ten times that? One hundred? At some price, I’d be able to buy more than twenty dollars worth of stuff in Malawi and sell it elsewhere. This will hold as long as the local currency has any value whatsoever. Even hyperinflation doesn’t overcome this argument: yes, the value of a hyperinflating currency will drop incredibly rapidly, potentially sending my purchased currency toward zero dollars of value even as I try to spend it. But I can simply raise the price even higher to compensate for that fact. In any case, that is far from the situation here in Malawi. The exchange rate should probably be around 20-30% higher, and if it were you could buy all the dollars you wanted.

Now, I’m not trying to argue that floating exchange rates have no problems, or make any policy recommendations at all, really. My point is merely that the current situation is in fact a policy choice. I can understand why the government chooses to frame it differently, though. “There’s a shortage of forex” sounds like a reasonable explanation for the country’s problems, and it definitely seems to be perceived as something outside the control of the government. “We set a binding price ceiling and nobody is stupid enough to sell dollars at a legal price” would be a tougher sell to the public. But it has the virtue of actually being true.

*The bank in question is Charles Schwab Investor Checking. Among their many other virtues, they allow their customers to use any ATM in the world for free, and actually reimburse any fees charged by the ATM. The downside is that they don’t have physical locations, so you can’t go talk to a teller about your feelings (or deposit cash). I won’t link to their site since it would be hard to prove that I’m not getting kickbacks from them, but I swear that they are actually awesome and not paying me to promote them. It’s worth noting that I’m not a very successful marketer: I’ve been touting them at every opportunity for years with almost no success.