I’m very happy to announce that my paper with Lasse Brune, “Income timing and liquidity constraints: Evidence from a randomized field experiment”, is now forthcoming at the Journal of Development Economics. You can access the paper for free until March 29th, 2019 by following this link. The accepted draft of the manuscript is also permanently hosted on my website here.

Here’s the abstract of our paper:

People in developing countries sometimes desire deferred income streams, which replace more-frequent income ﬂows with a single, later lump sum. We study the effects of short-term wage deferral using a randomized experiment with participants in a temporary cash-for-work program. Workers who are assigned to lump-sum payments are five percentage points more likely to purchase a high-return investment. We discuss the role of both barriers to saving and credit constraints in explaining our results. While stated preferences for deferred payments suggest a role for savings constraints, the evidence is also consistent with a simpler model of credit constraints alone.

One of the basic findings of our paper is that the timing of income matters a lot for the timing of expenditure. Here’s a graph of expenditure by weekend for workers who were paid the same amount of money in weekly installments or a single lump sum at the end of the month: 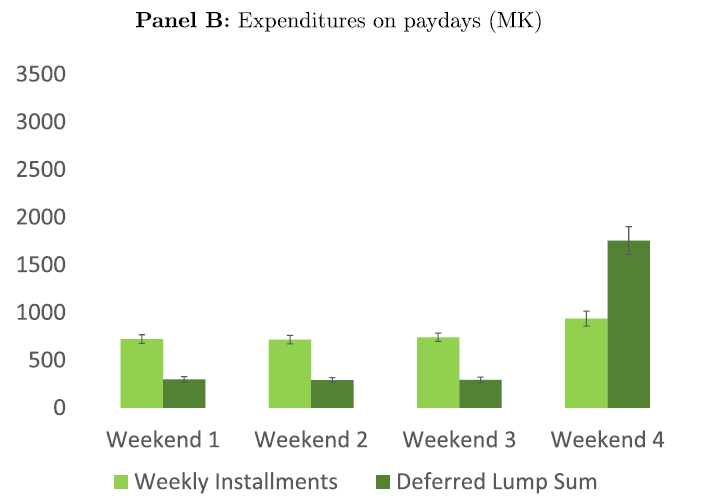 This clearly suggests that workers are liquidity-constrained. And our workers’ stated preferences suggest that the binding constraint is actually a savings constraint rather than a credit constraint. That is, they’d like to save their money but are unable to. Getting paid in a later lump sum relaxes that constraint. Those stated preferences are consistent with Casaburi and Macchiavello’s paper in the latest AER – they find that dairy farmers in Kenya are willing to forgo profits in order to get paid in deferred lump sums.

The core contribution of our paper is to show that this switch from smooth payments to deferred lump sums has effects on actual investment decisions. At the end of each month of the study, we sold workers a bond that paid a 33% return in two weeks with certainty. Paying workers in deferred lump sums substantially raises the uptake of the bond:

Despite the workers’ stated preferences, we cannot conclusively show whether these effects are due to credit constraints or savings constraints. We develop a model to show how the lump sum payments would affect bond purchases under different kinds of liquidity constraints. First, we show that our workers are definitely credit-constrained at the point of the bond purchase. If they weren’t, everyone would buy it and we would see no treatment effects. Then we show that during the period before the bond sales, our workers must be either credit- or savings-constrained.

If they are credit-constrained, then the people who were induced to buy the bond by the treatment are those who would prefer a smooth income profile but cannot borrow against their future lump-sum earnings. They end up with excess liquidity once their wages are paid, and they spend some of that on the bond. If they are savings-constrained, then the people who the treatment induced to buy the bond are those who would prefer a lumpier income profile. They want to save money, and the deferred wage payments let them do that.

What this means is that if our workers were credit-constrained, then our results imply that deferred wages made them worse off. The opposite is true if they were savings-constrained – the deferred lump sum payout relieved the savings constraint and made them better off.

So we’ve shown that deferred wage payments matter for investment choices, and Casaburi and Macchiavello show that some people definitely want deferred payments. But can deferred payments make people better off? That is, can they help people save money, and move outcomes like actual asset purchases? Lasse and I have teamed up with Eric Chyn to study that question, by turning deferred wage payments into an actual savings product that we offered to a set of workers at a tea company in Malawi. Our preliminary results are available here, and our evidence suggests that the demand for this savings product is high and that it leads to increases in actual physical asset ownership. Keep watching this space for more results from that project.

One of the things that’s satisfying about this paper is that it’s my first publication in an economics journal (I’ve published in health journals before). It was a long time coming: Lasse and I first started designing this study over six years ago. We collected the data in 2013, and early drafts were part of his dissertation in 2014 and mine in 2015. Despite the long period between collecting the data and publishing the paper, I came away from the publication process very satisfied. We were treated fairly and got timely and constructive reviews.

The JDE submission process was particularly positive. We got our first-round R&R in about two months, and our second-round R&R in about four. Most of the delay between our submitting the paper and the paper acceptance was the time we spent working on revising it. Moreover, the peer review process substantially improved the paper: the writing and argument is much tighter, and the link to economic theory is far clearer, than either were when we first submitted the paper.