Malawi’s National Statistical Office and ICF International recently released a report containing the main findings from the 2015-16 Demographic and Health Survey for Malawi. The DHS is an amazing resource for researchers studying developing countries – it provides nationally representative repeated cross-section data for dozens of countries. Tons of amazing papers have come out of the DHS data. I am a particular fan of Oster (2012), which shows that the limited behavior change in response to HIV risks is explained, at least in part, by other health risks. (A shout-out to IPUMS-DHS here at the University of Minnesota, which lets researchers quickly access standardized data across countries and time).

Another great use of the DHS is to look at trend lines – what health and social indicators are getting better? Are any getting worse? There is some really good news in here for Malawi: the total fertility rate (the number of children a woman can expect to have over her lifetime) has declined significantly in the past 6 years, from 5.7 to 4.4. This is a big drop, and it comes from declines in fertility at all ages: 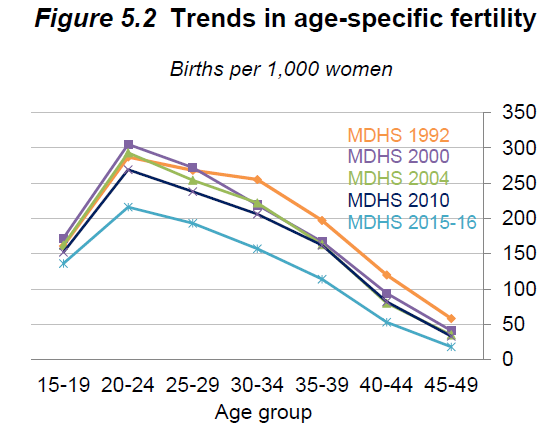 You can argue about whether lower fertility is necessarily better, but it seems to go hand-in-hand with improving economic and social indicators across the board, and reducing fertility probably causes improvements in women’s empowerment and access to the labor market. Moreover, the average desired family size in Malawi is 3.7 kids, so at least in the aggregate Malawians would also see this decline as an improvement.

There’s another eye-catching headline number in the report, which would be amazingly good news – the prevalence of HIV has fallen from 10.6% to 8.8%. That’s a huge drop! As long as it didn’t happen due to high mortality among the HIV-positive population, that’s really good news. Only it didn’t actually happen. What did happen was that they changed their testing algorithm to reflect the current best practice, which uses an additional test to reduce the false-positive rate. They have the data to compute the prevalence in the old way, too. Here’s what that looks like:

Almost totally flat. If anything there’s a small improvement for women and a slight increase in prevalence for men, but we can’t rule out zero change. This shouldn’t be a surprise, though – people can increasingly access life-saving ARVs in Malawi, which tends to push up the prevalence of HIV because HIV-positive people stay alive.

To the credit of the people who put together the report, they never present trendlines that compare the old method to the new one. People who assemble cross-country summary stats from the DHS are likely to be misled, however. It would probably be better to mention both numbers anywhere the prevalence is mentioned, since they are both valid summaries of the data done slightly different ways – and 10.4% is the number than is more comparable to previous DHS waves.

There is a nugget of good news about HIV buried in here, as well – these findings imply that the prevalence of HIV was never quite as high as we thought it was, in Malawi or anywhere else. Taking this discrepancy as a guide, we have been overstating the number of HIV-positive people worldwide by about 15%. It is definitely a good thing that those people aren’t infected, and that’s a 15% reduction in the cost of reaching the WHO’s goal of providing ARVs to every HIV-positive person in the world.