Rape is a big problem in the United States. Reliable figures are very hard to get for such a stigmatized and personal crime, but regardless of the exact prevalence, it happens much too often for us to be comfortable with. Well-publicized cases out of India suggest that in developing countries the problems are even worse (but reporting is probably worse as well).

Although most people agree that rape is an important issue, there is a dearth of actual practical policy suggestions for dealing with it. Encouraging women to be more careful and aware of their surroundings smacks of victim-blaming and is unlikely to do much to reduce all-too-common acquaintance rapes and date rapes. Pointing the finger at “rape culture” could be part of the right answer, but it’s not obvious what to do about that culture, and the people who make major contributions to rape culture probably aren’t reading think pieces about it. More important, neither of these proposed solutions is backed by actual evidence.

However, an excellent new paper by Scott Cunningham and Manisha Shah does provide evidence about something that works to decrease rape: decriminalized prostitution, specifically “indoor” prostitution (massage parlors, escort services, and online sex work). Rhode Island unintentionally decriminalized the practice in 2003 (they have an excellent discussion of how this happened), and Cunningham and Shah show that this increased the size of the sex market and also reduced cases of gonorrhea (which is mainly spread by sex workers) by 39% across the whole population. Even more striking, they demonstrate that the overall incidence of rape declined by 31%.

One of the best features of the paper is that they use what I once heard Steve Levitt refer to as a “mosaic of evidence” to support their claim. They draw on a range of different datasets to illustrate their findings both visually and numerically, and to buttress their assumptions. Their main estimates are based on a difference-in-differences between Rhode Island and the rest of the US, but these are buttressed by a “synthetic control” approach. The synthetic control method, from Abadie and Gardeazabal (2003), finds other states that look similar in terms of previous trends for the outcome, and uses a weighted average of them to form a comparison group. The authors provide tons of graphs to show exactly what they are doing, and they all look about as compelling as this one does: 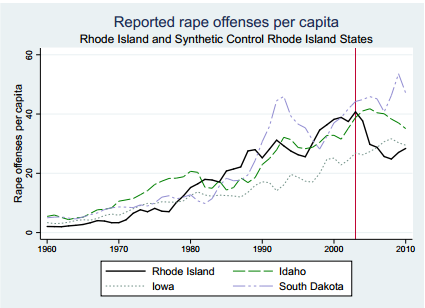 What’s especially striking about this graph is that Rhode Island re-criminalized prostitution in 2009, exactly when rape cases go back up.

Cunningham and Shah are very careful to say that they cannot conclude exactly why decriminalizing prostitution reduces cases of rape. They consider a number of potential mechanisms, and conclude that the most likely one is that, for some men, rape and prostitution are substitutes. That is, men commit rape in part due to sexual desire, which can be satisfied in other ways. While Cunningham and Shah’s paper cannot demonstrate this for sure, their finding is consistent with other research by Todd Kendall that finds that the rollout of the internet, and the attendant increase in the accessibility or pornography, appears to have driven a decrease in cases of rape.

One potential issue with decriminalized prostitution is that it may just be substituting one form of oppression of women for another: decriminalized indoor prostitution may attract abusive pimps or madams, or encourage the illegal sex trade. The experiences of Nevada and several countries in Europe suggest a solution, however – full legalization and regulation of sex work would allow for law enforcement to protect women who engage in sex work, and undermine the market for illicit paid sex. A similar issue potentially affects pornography, where some actresses are exploited (but some emphatically state that they are doing what they love). Here, too, the answer is to have a legal but well-regulated market: exploitation may happen where pornography is legal, but if it were forced underground and run by criminal organizations, it would probably be much worse.

Cunningham and Shah’s paper, along with the earlier Kendall paper, suggest two ways to reduce rapes through public policy: legalized access to pornography, and legalizing sex work. These policies would both operate through the same mechanism – which is that some men commit rape due to sexual urges. That’s not an idea that we are particularly comfortable with as a society – a common claim is that rape is an act motivated by power, or anger, and not by sexual gratification. But if we want to reduce the incidence of this awful crime, we need to move out of our comfort zone, and rely on the evidence rather than what we’d like to believe.