On Sunday Amazon announced plans to deliver online purchases within 30 minutes via fleets of autonomous drones. I’ve seen various reactions to Amazon Prime Air: from excited, to claiming this is a PR stunt timed to coincide with Cyber Monday, to the aforelinked Matt Yglesias piece which argues that this is a defensive move to prevent competitors from doing the same thing. But I think everybody can agree that the idea of using thousands automated miniature helicopters in order to save consumers the effort of going to the grocery store is totally insane. I, for one, was sure this was some kind of April Fool’s joke resurrected by the internet and circulated at the wrong time. And my instinctive response, on learning that it was serious* was “that will never work”.

And there’s a good chance it won’t work – they might not even be able to secure permission to do it. But that’s fine. Crazy ideas are the mother of successful innovation. I had almost the same response back when Google announced Gmail (which actually did happen on April Fool’s Day of 2004): “A gigabyte of storage? For free? No way. Never. Well, maybe in 2014, but not now.” As it happened, they were serious, and Gmail heralded the now-familiar world where all our data is stored in the cloud and accessible anywhere for free. But for every Gmail there are untold numbers of Webvans (which was really sort of a low-tech Amazon Prime Air), most of which we’ve never heard of.

And this isn’t just a private-sector game: government-sponsored crazy ideas make the world go round. Building the Panama Canal (and for that matter the Suez) was totally nuts – but crucial to the development of the world we live in today. We put a man on the moon during an era when science hadn’t yet sorted out that smoking kills you. As a result, we now regularly hurl chunks of metal off of the Earth’s surface, with enough speed that they miss the ground – chunks of metal that then send us signals from outer space to help us find the nearest gas station. The future is awesome – thanks in large part to crazy things people tried in the past.

Indeed, I’m actually worried that the world doesn’t have enough crazy ideas to keep pushing us into the awesome, unexpected world of the future. So you can only imagine my delight when I stumbled across this op-ed in The East African by Charles Onyango-Obbo. He calls for a set of canals linking the landlocked countries in Africa to the sea:

There could a T-shaped canal that begins in Mozambique, touches the Botswana-Zimbabwe border, hugs Malawi, snakes along Tanzania’s southeast border, to Burundi, Rwanda, Uganda, then along the eastern edge of DR Congo, and to South Sudan.

Then a leg would begin from Obbia on the Somalia coast, into southern Ethiopia, connect with the southern leg in South Sudan, and then cross through CAR, Chad, Niger, run between Mali and Burkina Faso, into Guinea and end on the Atlantic Ocean.

Some of you may have heard me talking about almost the exact same idea – replicating the system of waterways that connects the American Great Lakes to the Ocean, but with their African cousins.

Now, this idea is completely nuts. The environmental consequences alone are enough to make it – probably – impossible. And where would we get all the water we’d need? This doesn’t even mention the number of locks we’d need, since the great lakes region of Africa is, topographically, more or less a single high plateau:

This would be a far bigger challenge that the Panama Canal was, or even the system of waterways connecting the American Great Lakes to the Ocean. On the other hand, the benefits would be enormous. Here is a map of where people in Africa live: 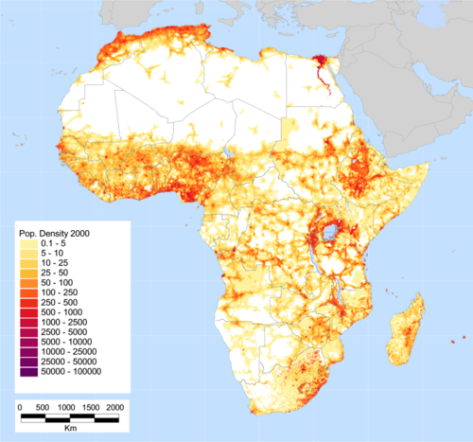 It’s not just that lots of countries in Africa are landlocked – a huge number of people live in landlocked countries, with a particularly high concentration around the great lakes. A system of canals linking those lakes to the ocean would drastically reduce the cost of shipping goods from those countries to the rest of the world – potentially making them competitive in actual manufacturing, instead of just exporting raw materials. It would also be absurdly expensive, require better international cooperation than the world has ever seen outside of wartime, and disrupt hundreds of fragile ecosystems. In short, it’s a crazy idea – the kind we need more of, because every once in a while an idea this crazy actually works out.

*I mean, probably serious. This could still be a joke for all I know.

1 thought on “In Praise of Crazy Ideas”